Fair Price Shops are very common in India. We often find one fair price shop, commonly known as ration shops, in every locality of urban, semi-urban and rural areas. There are many people who experience hard times while purchasing their day to day necessary goods like rice, sugar, wheat, flour and others. Fair Price Shops are the cheap stores that give immense subsidies on these necessary commodities. Runs by government ration shops offer almost half and sometimes less than half price for all the products. FPs has been started for the people who belong to economically backward classes, but unfortunately people who are well capable of buying things from market are purchasing food commodities from there as well in half prices. This leads to expansion of black markets. But as a whole the FPSs are the best place for the poor people to get their daily food needs. 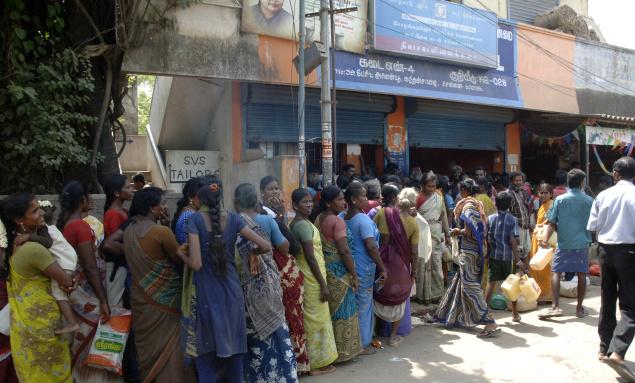 In recent times we have seen that the government has keen to start a many systems that involve digitization. Be it a start up portal or online registration for several schemes, the GoI is promoting digital India in full swing. This biometric system is also a major part of digital India. Under this each time when a person buys things from ration shops will have to use his/her thumbs print on a biometric machine to record his history like the signed receipt copies.

This system will not only help to track the buyers and their requirements but also it will help to prevent irregularities that occur in the PDS and FPS.

No service under government comes with hassle free process. The biometric system is no different either. According to the new Food Security Act, BPL card holders are considered among chosen priority families. Due to this norm the government freezes the issuing of new ration and BPL cards in many cities. In Delhi, there are 73 lakh people who are in need of ration shops. As per the biometric system capacity, over 2300 shops will have the provision of using biometric system which will cover nearly 19 lakh people across Delhi. That means only 44% of the total needy people. So the rest of the people will not get the provision of biometric system which will definitely create a rift within the system.