The Ganga Gram Yojana (GGY) is a development project of villages of Uttar Pradesh, which are situated along the river banks of Ganga. Under this project, the disposal of garbage and sewerage in the Ganga river will be prevented and a different disposition proposal will be chalked out. This scheme is launched in the state of Uttar Pradesh and will be directed towards around 1600 villages that lie on the banks of river Ganga. The launch of this development scheme was done by Hon’ble Union Minister of Water Recources, Smt. Uma Bharti on 05-01-2016. Ganga Gram Yojana was launched in a small village named Puth, situated in the district of Harpur, Uttar Pradesh. 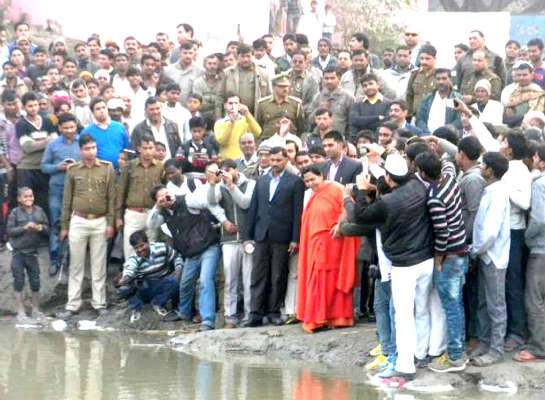 Ganga is the Indian national river and it is also the longest river flowing in India. It originates from Himalayas from the state of Uttarakhand and has a stretch of 2525 km. It ends its journey at the Bay of Bengal. Ganga or Ganges is the holy river of Hindus. It is worshipped by the Indians and have religious and sentimental values. The villages and cities located along river Ganga depend on it for their day to day livelihood. But according to international surveys, Ganga is the one of the most polluted rivers of the world.

A large number of villages, town and cities are situated along the banks of Ganga and they dump their daily wastes in it. All household sewerages, industrial waste drains, etc. are linked to this river Ganga, thus polluting the holy river. There is a huge difference between the quality and color of water at the time it reaches the Bay of Bengal, from the time it gets originated.

Hindus consider the water is Ganga is pure and it purifies the sins. But ultimately, the river gets severely dirty and polluted on its way. The pollution levels of the river have risen to alarming levels. There has been several schemes and measures taken by both the central government and state governments to stop the pollution of Ganga and to purify it.

But till now, no scheme has tasted success. So a special river purification scheme for Ganga was floored for purification and beautification of this river, called Ganga Gram Yojana. This scheme will be implemented by breaking down the entire work into several phases. This will result efficient and effective implementation of the project. In its first phase, two hundred villages of Uttar Pradesh will be targeted.

The sewerage drains coming out of the villages will be redirected to treatment plants, instead of letting them discharged into the Ganga. The sewerage treatment plants will be developed and redesigned so that they can efficiently consume the wastes and process them, without letting them effecting the environment. New toilets will be constructed for every household of these villages. The Govt. has allotted Rs. 1 crore per village for the construction of toilets. The entire waste disposal and water management scheme will be chalked out under Sichewal model, which is a small village in Punjab. The villagers of Sichewal started an innovative idea of water management, as well as waste disposal.