The BDA which is the sole authority for housing and development activities in the city of Bangalore, Karnataka, has proposed a new layout for allotment of residential sites. This new project is named as Kempegowda Layout, which was stalled yearly a decade ago. Not it is getting fresh life under the leadership of Shri K. J. George who is the Minister of Development of Bengaluru City. Under this project, BDA has already issue the notice regarding the details, joining conditions, eligibility conditions, etc. This project will be beneficial to thousands of Bangalore residents who want affordable housing solutions within the city and its adjacent areas. 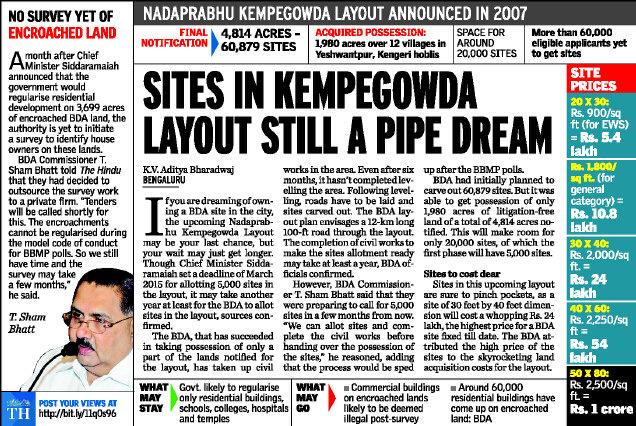 Areas of implementation and first phase work in Kempegowda Layout

As per BDA sources, the project will come up in several phases. At first the first phase is going to roll out soon. In the 1st phase of Kempegowda Layout allotment of residential sites, a total of 5 thousand sites will be allotted to the general public. After a span of more than a decade, finally the BDA authorities have declared of utilizing more than 300 acres of land for this residential site allotment project. At first, the areas where the residential sites will be allotted are along the NICE Road, which is situated between Yashvantpur and Mysore Road.

The BDA has originally planned to develop nearly 4,043 acres of land for residential and commercial site development. At present, BDA has a total of 2,100 acres of land which can be used for both purposes. In future, around 20,000 residential sites will be developed by BDA in this vast land. The allotment procedure will be done, phase by phase. The first phase will have 5,000 allotments for residential sites. After successful allotment procedure is over in the first phase of Kempegowda Layout, subsequent phases will start. In both the second and third phases, BDA has planned to allot the same number of residential sites as it is allotting in the current phase, i.e. 5,000 sites.  The fourth phase will see allotment of commercial sites by BDA. These commercial plots can be utilized for shops, shopping malls, offices, trade spaces, etc.

Some vital details of Kempegowda Layout by BDA

Those who want to join this project can register themselves by drawing application forms which will be available in several banks across the Bengaluru and also in some other parts of Karnataka. There are five banks that are participating in this program, where one can get the application forms for Kempegowda Layout namely

The forms were provided starting from 28 Dec 2017. The last date of submission of filled application form for Kempegowda Layout is 9 Feb 2018. The application will be submitted along with a token amount or an initial deposit which is essential to make the booking for residential site.

Availability of residential sites under the Nadaprabhu Kempegowda Layout

The BDA has taken an important decision to provide some relief to those applicants who belong to Scheduled castes, Scheduled tribes and EWS categories. They will get benefit not only in the rate of per sq. feet of land, but also in the initial deposit amount.

These sections will have to deposit a lower amount to book the residential sites. For the basic plot size of 6m x 9m, the general category applicants will have to shell out Rs. 1,30,800 as initial deposit. Whereas, those who belong to SC / ST category will have to pay Rs. 52,400 only. The BDA has announced that around 1,000 sites are completely dedicated for the EWS category which will be the basic 6m x 9m size plots. Also it is expected that only 50 per cent of the total residential sites under the Kempegowda Layout will be available for the general categories. The govt. employees, the disabled applicants, OBC applicants in addition to the EWS and SC / ST applicants will also get their share of reservations.

How to apply for the Nadaprabhu Kempegowda Layout by BDA

The application fee for general category applicants is Rs. 400 whereas the applicants belonging to SC / ST / EWS / PWD categories is Rs. 200 only.

All applicants must attain the age of 18 years while applying. They must be domicile of Karnataka for minimum of 15 years. Hence NRI applicants cannot join this scheme. However, if the applicant or any dependent family member of the applicant has already been allotted a site by BDA earlier, then he / she is not eligible. Those applicants who want to join this project as EWS category can do so only if they have annual income of less than Rs. 1 lakh.