One of the biggest challenges for the Indian government is the empowerment of women and girl children. For this a lot of scheme and initiatives are being taken but then none of it is proving to be enough. Efforts are being made by the central government as well as the state governments in order to uplift the condition of the women especially in the rural areas and the women who belong to the urban poor category. 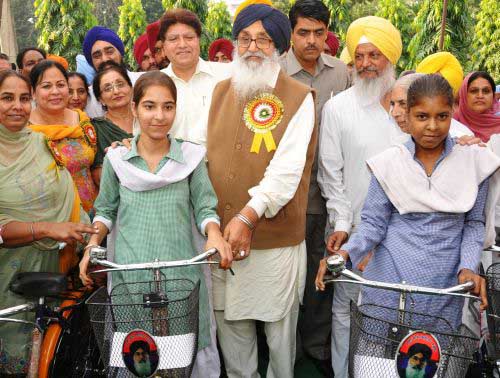 The Punjab government also has been making efforts and has been launching a few schemes that would help the girl and women of the state. The state government of Punjab has launched a few beneficial scheme for women with the name of the famous Sikh woman leader Mai Bhago.

In the year 1705 a women from Punjab led a group of Sikh soilders to fight against the Mughals, her name was Mai Bhago. She was a Sikh woman and keeping in mind her bravery the government of Punjab has launched a few women empowerment schemes with her name.

She was known to be a brave and a strong woman who is considered as a saint by many. She belong to a village called Jhabal near Patti, which is now falls under the Tarn Taran district of the Majha region. She is known for her brave encounters with the Mughals.

Scheme announced under the name of Mai Bhago

There are two schemes which are launched under the Mai Bhago. Mai BhagoVidya Scheme also known as Mai BhagoCycle Scheme and the Mai BhagoIstri Shakti scheme. All those schemes are focused towards the empowerment of the women and children in the state of Punjab.

Mai BhagoVidya scheme was launched by the state of Punjab in the year 2011, under the leadership of the Parkash Singh Badal, with an objective of providing a comfortable travel to the female students of the state. So one of main problems that the he state were facing was that the schools were very far away from the homes of the students and because of this there was an increase in the school dropout rates among the girl students. The distance is so much that the students were finding it difficult to go walk or avail any transports to their school. Due to the girls of the state are dropping out from the schools and thus quitting education. As a solution to this probelm the Punjab government ha launched the Mai BhagoVidya scheme.

With the help of the bicycles the girl students could easily travel to and forth their school and this would save them from the pressure of dropping out from the schools.

Current situation of the scheme

Currently the situation is such that the government of Punjab has not been able to provide payment for more than 72000 bicycles that were given around a couple of months ago to the girl students of the state for free.

It has been reported that the state government Punjab had purchased the bicycles from three manufactures for a total Rs.18.5 crore which makes a single bicycle cost Rs.2600. the distribution of the cycles was done on the Independence Day and since then a lot of reminders has been given to the government for the release of payment, but then no action has been taken.

The main motive behind the launch of this Mai BhagoVidya scheme is to boost the literacy rate of women in the state. On accounting the fact of typical transportation for women from their houses to school many school women children after completing their secondary education which is 8th to 10th standard their parents prefers them to hold from their studies.

Now this scheme again is launched by the government of Punjab with an objective of providing support to the women of the state in establishing small scale businesses which would benefit the women and their families.

The scheme wants to make the women of the state more self-dependent and strong and for which it is important that they have a source of income. The best way to do so is by encouraging them in setting up small scale businesses in sectors like food processing, handicrafts, stitching, tailoring, hand loom, agriculture, and horticulture. Apart from this the women will be encouraged in involving computer enabled services, spoken English, hospitality sector, travel and tourism sector, etc. The main focus here would be on encouraging the women of the rural areas.

Some features of the scheme

Both Mai BhagoIstri Shakti scheme and Mai BhagoVidyaScheme are progressive schemes which have been running in the state f Punjab for quite some years now. Even though the schemes have faced certain hurdles, it has helped a lot of women and girls in the state.

The schemes which are launched under the name Mai Bhago which are Istri Shakti scheme and Vidya Scheme are keenly focus on women growth and their empowerment in the state. Being in active for few years, the schemes Mai BhagoIstri Shakti scheme and the Mai Bhago Vidya Scheme shows positive results on the improvement of women involving in entrepreneurship and also growth in women’s school level literacy rate.