Madhya Pradesh Education Board has recently come up with a new scheme for the 10th and 12th board students who have unfortunately failed in their board exams. The scheme is named Ruk Jana Nahi (Don’t stop) scheme. Education Minister Mr. Paras Jain has declared that those students who could not clear the board exam will get a chance to reappear for the failed papers to clear them and move on for further study. This re-exam system will prevent the student to lose their one year and they can easily proceed for further studies.

The MP government has taken this initiative and started the scheme called Ruk Jana Nahi scheme for the board students of 10th and 12th standard. The students who could not pass their papers in final board exam will get a chance to seat for re-exam in the same year. Some of the leading universities and colleges in India already have this system of supplementary tests where failed students get a chance to reappear for the exam and save their one year. This time MP education board has come up with same system for the 10th and 12th students to save their one long year.

According to the rule, the students will have to reappear for the papers they have failed to clear in board exam and once they clear the paper they can receive a fresh mark sheet and apply for further studies.

The student must be from 10th or 12th board examinee. Also the student must fail in the papers to reappear for the scheme. Under this scheme, any student can appear for any papers he / she has failed in (minimum one & maximum 6 papers).

The exam date has announced in 15th June 2016. The examination will start from the mentioned date and will last till the total number of papers is covered.

It will take nearly a month to publish the result. As per the scheme, by the end of the month July 2016, the result will be out. If there is any delay then at the max it will be August by when the students will get the new mark sheet. 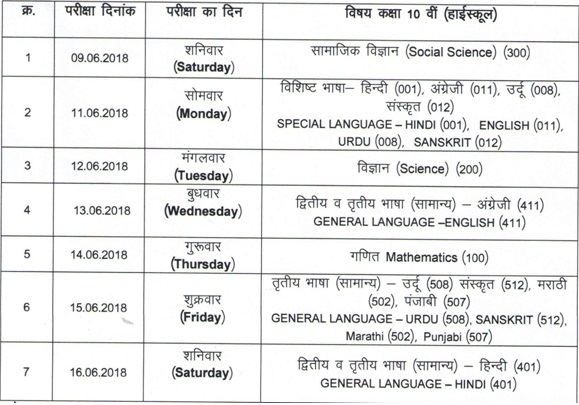 Hope that you have understood the process. WE WISH YOU A BEST LUCK FOR YOUR FUTURE.