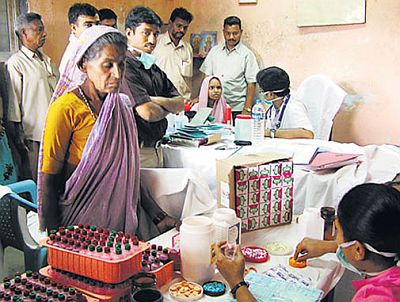 So the two components of the scheme are, to establish the set up the AAIMS institution and to modify the medical college institution, which are undertaken by Government.

Approximate cost of the scheme

This scheme got the huge success all over the country. Some states adopted the facilities of this scheme. Bihar, Chhattisgarh, Madhya Pradesh, Orissa, Rajasthan and Uttaranchal are mainly takes the facilities of this scheme. Approximately seventeen hundred crores are spent on this scheme. Eight hundred twenty crores were spent for approval of AAIMS institution. Six hundred twenty crores was the cost of construction and two hundred crores was the cost of the improvement of the medical instrument and modifying the operation theatre.

This scheme helps the poor people to get the better medical treatment. Many facilities are available from the rules and regulations of this scheme.

These facilities given through the below points;

Thus, the scheme takes the sudden change in medical field and to improve the medical treatment with a good manner. This scheme is not only help the people to get a better treatment but also help the people to get a best doctor. By the establishment of AAIMS institution, the talented student who want to know everything of medical field and want to be a doctor, he can easily learn everything from this institution.

In two thousand twelve AAIMS amendment act was first introduced, but nineteen fifty six All India Medical science act give the six AAIMS. By the law medical college and nursing institution generally increased and the student can get best opportunity of this institution. Government declare that regular MBBS course will available and nursing training will started in this institution. Starting this scheme all medical facilities are available in modern era. IPD, OPD OT services are became functional.

Introducing this scheme, Prime Minister Can washed out the lack of medical treatment and also improves the backward state, where people are suffering from many diseases but they could not get any treatment. PMSSY is the best scheme that can totally change the medical field. In a good sense it is the most changeable scheme, and it bring a sudden revolution in the medical field.

In order to reduce the imbalances in providing the availability of healthcare to various parts of the country, the Pradhan MantriSwasthya Suraksha Yojana (PMSSY) was launched in 2003, the Union Cabinet of the current govt has approved the continuation of this scheme with an outlay of INR 14,832 crore, with the motive to enhance the healthcare infrastructure of the under serve states in India. Pradhan Mantri Swasthya Suraksha Yojana(PMSSY) Scheme will offer  a long-term benefit for different regions. Also, the quality medical and nursing education will be available in different regions of the country.