People within the state of Maharashtra now have access to a new Wifi system. The first phase of the Mumbai Wifi system has been released. Chief Minister Devendra Fadnavis announced on Twitter that Mumbai Wifi will generate 500 new Wifi hotspots around the state. This in turn will produce one of the largest public Wifi services in the world. 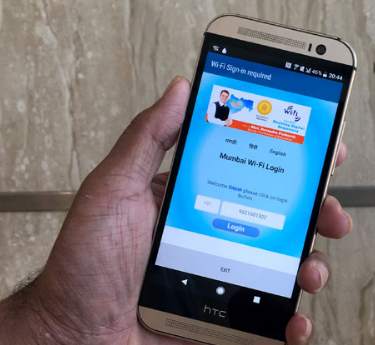 Many urban areas currently have access to this system. These include areas around the Vidhan Bhawan and Kalanagar areas as well as the Bombay High Court. Parts of the eastern and western suburbs have also gotten access to the Mumbai Wifi system.

Interestingly enough, this is coming before the BMC polls. Whether this will impact any decisions in the elections is unclear but it is a sign of the current administration aiming to make what it has more marketable.

The 500 new hotspots in the state mark only the state of the Mumbai Wifi system. Chief Minister Fadnavis has been promoting digitalization within the state since taking office in 2014.

Fadnavis states that about 1,200 hotspots will be available throughout the country when the entire program is completed. The program is expected to be complete and fully operational by 1st May 2017.

Regular reviews will be used to see how the speed and connectivity within the system is running. This is to confirm that all people who have access to Wifi signals are getting the support they are looking for.

More People Are Signing Up

People will have to sign up to get access to the Mumbai Wifi system. So far, people have been responding favorably to the pilot part of the system. From January 2 to 8, about 23,000 users signed up for access to the system. They have downloaded about 2 terabytes of data through the Wifi system so far.

Those who are aiming to access Mumbai Wifi for the first time will be able to do this by using a series of important steps.

This is a simple process that only has to be done once for one’s phone number although it helps to watch for where the network is if the user isn’t able to log in automatically.

Also, this will stop working if the SIM card in one’s phone is removed or replaced. The user will have to log in with a new number altogether to ensure that one’s identity can still be confirmed and that a device will still be able to use the Wifi signals.

How Are the Speeds?

Reviews of the Mumbai Wifi system have found that the speeds for the system are relatively strong. The system can work at speeds of up to 22Mbps. However, the speeds can be rather inconsistent. They have been measured form 3 to 15Mbps in many cases. The speeds are still rather effective and efficient enough for most users.

The government will monitor progress of the public Wifi spots to see how they are working. It is unclear as to what any adjustments to the system would entail but they will work to help with making the system stronger and more efficient for people to use in many forms.

Although two terabytes of data have been downloaded in a week’s time during the pilot part of the program, the Mumbai Wifi system still has limits in terms of what people can do in a single day. A user can work with up to 2.1GB of data each day. An SMS message will be sent to individual users who get near their limits each day. Still, a person will be able to download about 1.5GB of data in about half an hour under optimal conditions.

Users aiming to get onto Wifi networks in public places around Maharashtra will have to take a look at the Mumbai Wifi system. This will expand throughout the early part of 2017 and will become more prominent around the state. This will be to make it easier for people to get access to Wifi signals and to do more with the materials that they are working with.