Sankalp Se Siddhi Scheme is an integrated yojana that the central government has taken for the betterment of the nation. Under this scheme major social and economical issues will be covered. Launched during the month of August in the year 2017, this scheme will be a part of New India Movement 2017. 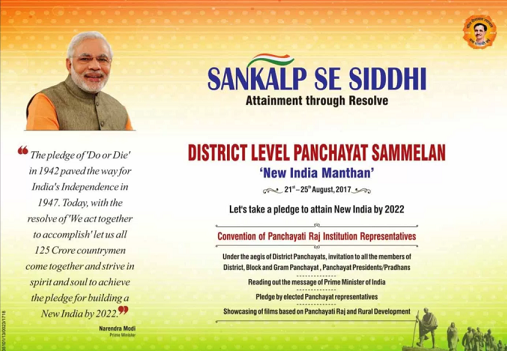 In the occasion of 75th anniversary of Quit India Movement, the central government of India has launched a new scheme namely Sankalp Se Siddhi Scheme. The Prime Minister of India Shree Narendra Modi has launched the scheme on 21st of August 2017. The scheme will be lasting for 5 years that is from 2017 to 2022. The Agriculture and Farmers Welfare Ministry will supervise the entire program.

States under the Scheme

As per the latest reports, until 20th August 2017, there are 18 states that have enlisted under the scheme. The states are Andaman & Nicobar, Telangana, Tamil Nadu, Kerala, Maharashtra, Gujarat, Rajasthan, Madhya Pradesh, Chattisgarh, Odisha, Bihar, Uttar Pradesh, Haryana, Himachal Pradesh, Punjab, Manipur, Nagaland and Meghalaya. All these states are being enlisted under the scheme. These states have organised the Sankalp Se Siddhi Program in 32 different locations across these states.

The Sankalp se Siddhi program will help the lower income group, especially poor farmers to earn double. In all these programs organised by the government, farmers and poor families will be notified about the doubling of their annual income by the year 2022.

According to the reports published, tribal families too will be able to double their monthly or annual income under this scheme.