The start of 2018 saw the announcement of several unique schemes, aimed at the betterment of farmers. One of these programs was the Kisan Urja Suraksha Utthaan Mahaabhiyan full form of the KUSUM scheme. Under this arrangement, the central government desires to assist as many farmers as possible to install new and improved solar pumps on their farms. The farmers need not pay a hefty fee for this benefit as it comes with government subsidy. 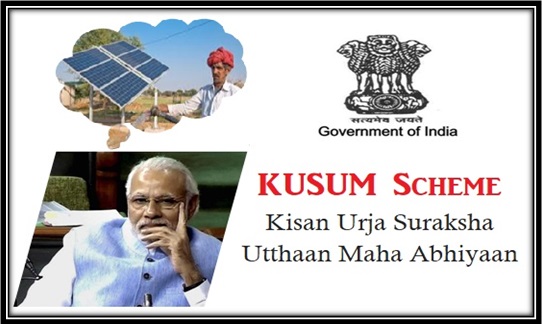 The main aim of this scheme is to provide the farmers with advanced technology to generate power. The solar pumps will not only assist to irrigate the farmers, but will also allow each farmer to generate safe energy. Due to the presence of the energy power grid, the agricultural labors will be able to sell the extra power directly to the government. It will provide them with extra income as well. So, this scheme will bring double benefits.

Features of the KUSUM Yojana

Components of the scheme

The scheme is elaborate and will also require a lot of funding for successful implementation. As per the announcement of this program, the Finance Minister and the power department announced that it will require around Rs. 48, 000 crores. The allocation of funds will be done in four separate segments.

According to the initial draft of this scheme for 2019 the solar plants were said to be erected on infertile areas that can generate a power of 28000 MW. In the initial phase, the governments would offer a total of 17.5 lakh solar powered pumps to the farmers.The scheme is not only aimed at providing better benefits and added income for the agricultural labors, but will also lower the level of pollution. As the solar pumps take over electricity driven or diesel pumps, it will provide better utilization of resources.